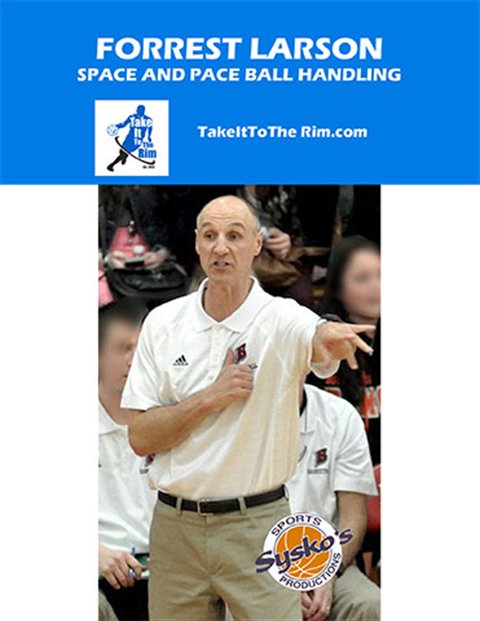 Forrest Larson coached high school basketball in the State of Wisconsin for 32 years and is a member of the Wisconsin Coach’s Basketball Hall of Fame.  Teams he coached made 5 appearances in the state tournament winning one state championship and finished runner up twice.  His teams won numerous sectional, regional, and conference championships.  He is known for his ability to innovate and develop offensive skill teaching progressions that carry over to playing the game of basketball.  He has developed 5 other best-selling DVD’s including Take It To The Rim and Simplified Run and Jump For High School Basketball.  He currently directs the Take It To The Rim basketball camps, does team and individual instruction at various high schools in WI and speaks at coaching clinics.

NEW IN 2019! This 93 Minute video is a GREAT VALUE! Space and Pace ball handling revolves around 3 separate change of pace workouts.  Changing speeds and the ability to create space is any player’s number one dribble move and probably the dribble move that is practiced the least.  Workouts include hard stops, creating space with a dynamic hip swivel, and the float dribble.  Each of these moves helps to create space giving the ball handler increased time and vision to make a decision plus a new angle to attack down-hill.  A specific teaching progression is demonstrated in which technique is worked on first, great technique allows you to compete against better players.  The defense is then added in succeeding steps to make each workout more game-like with the goal of players using these moves within your team’s offense.  The workouts can be performed in a team setting or by individual players working out on their own.  Also these dribble moves will give players the ability to compete against quickness either full or half court pressure.